Our recent trip to the Nevada Desert was atypical in ways that tested our choices.  One day we decided to visit Imlay Canyon.  The three reasons we chose Imlay Canyon were:

Unexcited by the prospect, we chose Imlay Canyon for sightseeing merely for its proximity to I-80 but it proved a worthy destination. Imlay Canyon is located slightly west of Imlay Village in the Nevada Desert and is historically a mining site. There are signs of mining still but on the afternoon that we explored there we saw no activity.  The Canyon is a perfect example of how intimate the high desert becomes when one departs the I-80 strip.  Imlay Canyon is one of a series of noncontiguous canyons on the northwest side of the Humboldt Range.  Like many canyons in that Range, it benefits from seasonal run-off and springs as evidenced by the presence of several mature trees. 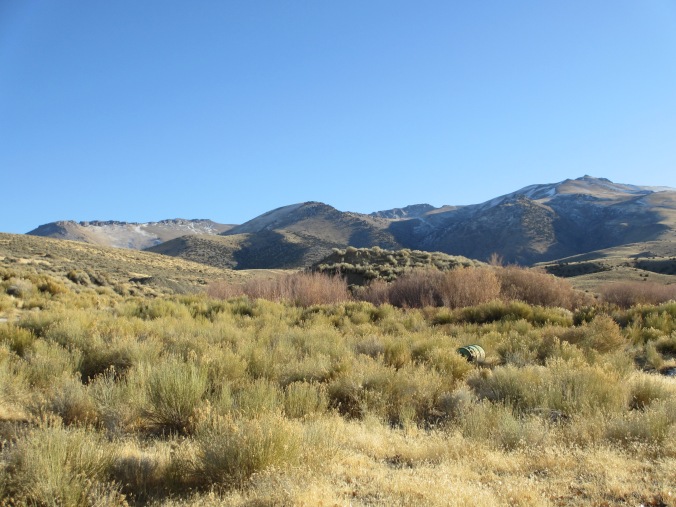 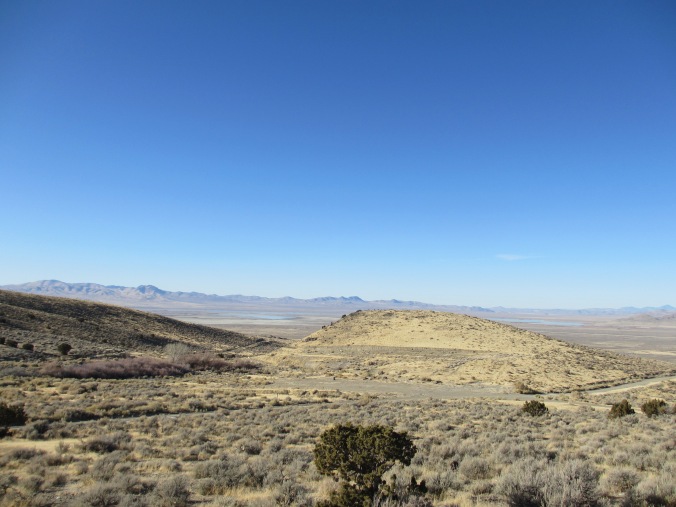 Casual sightseeing in the high desert is not a typical itinerary for us.  Usually we drive 100 miles or more daily through extremely isolated areas.  On those trips, we are dedicated to managing supplies, equipment, and navigation.

On this vacation, however, due to the extreme cold, I persuaded my husband to restrict our travels to locales from which we could walk within a matter of hours to I-80–the main artery in northern Nevada–in the event of a breakdown.  With nighttime temperatures hovering around zero, I wasn’t confident that the winter gear we’ve collected from flea markets and surplus stores–although all quality clothing and equipment–would insulate me sufficiently if we broke down and were stranded overnight.  My husband was game for giving the gear a good test but I detest the thought of prolonged exposure to merciless cold; I’m just not built like that.  And although we leave our trip itinerary with a responsible neighbor when we depart into the wilderness, rescues can be delayed and Pershing County demographics (population per square mile: 1) don’t support the potential for a chance encounter and rescue.

2.  An Unwillingness to Take for Granted a Prior Narrow Escape

Irrespective of odds and demographics, I couldn’t ignore the fact that my husband and I have already been the beneficiaries of a rescue in the Nevada Desert.  A few summers ago, while thirty-five miles away from the nearest paved road, with temperatures exceeding one hundred degrees we broke down when a rock punctured our oil pan.  Heat is my element–which is not to say that I wasn’t concerned about eventually dying of dehydration but I was able to keep a cool head.  I tented the car with towels and did a quick inventory of our supplies.  Because the sun was an eminent adversary, my husband and I decided to wait until twilight to exert the effort of setting up camp.  In the interim, a pick-up appeared out of nowhere, racing through the canyon and raising great walls of dust.  We had a 10-second window to catch the driver’s attention.  Had my husband not leapt like a leopard to flag the driver, the opportunity for rescue would have vanished.  As it was, my husband approached the man so frantically that he frightened the driver into expressing reluctance to help us, perhaps because he suspected we were staging a robbery; there are, after all, erratic characters carousing in the desert, not all of whom have innocent intentions.  Moreover, at that time we were ourselves so innocent that we had informed no one  of our destination that day.  By the grace of God, and by the grace of God alone, the pick-up driver finally agreed after several urgings on our part to transport us to safety.

3.  A Learned Willingness to Test the Premise that Choosing Self-Preservation Doesn’t Preclude Having Fun

Instinct, along with common sense, is a vital tool possessed by most wilderness explorers who survive more than one expedition. Instincts can be adhered to or ignored.  Ignoring an instinct frequently results in a situation in which all of the resources at one’s disposal are gradually or rapidly exhausted.  Whether slowly or quickly, the result is the same unless a rescue ensues.  I didn’t intend to let a break-down in the scorched desert end my wilderness affair but I neither would I deny my instinct: when it came to the cold, I just wasn’t feeling lucky.

So we drove to Imlay Canyon for an afternoon of desert traipsing, a purely pleasurable pursuit.

And were rewarded with beautiful views of Antelope Plains, Antelope Range, Humboldt Range and Star Peak. 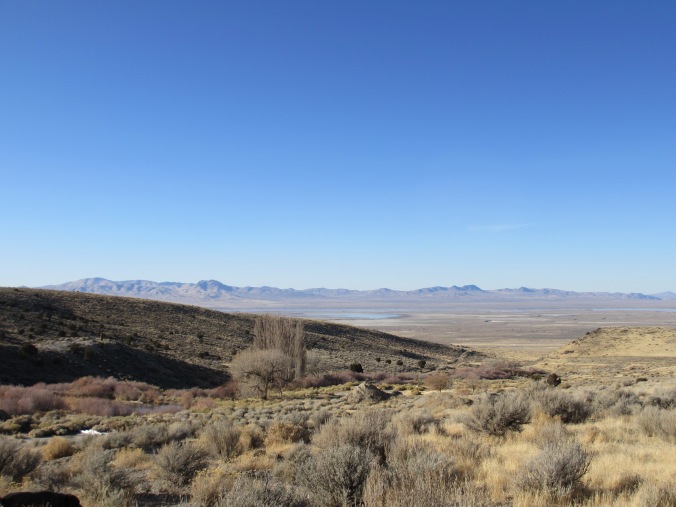 We discovered well-trodden Jack Rabbit trails, along with the entrance to a den concealed by wreath-like grasses. 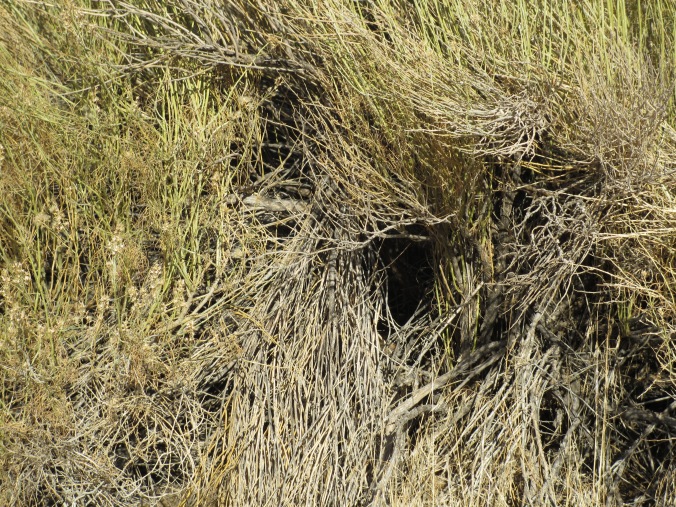 Our ten-year-old Plott Hound, bred for hunting but never trained, chased Jack Rabbits but never came close to catching one.  Jack Rabbits can run up to 40 miles per hour.  The dog’s exercise in futility gave him pause. 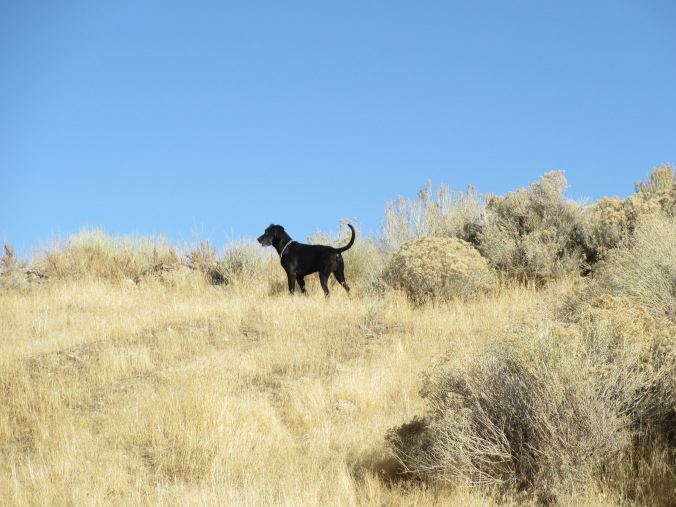 With the hound at rest and my husband ever-fretting at my frequent departures from his sight (I fret when he disappears near mine entrances,) I hopped uphill in search of an unobstructed shot of Star Peak.

And found it, the perfect adornment for a lovely afternoon. 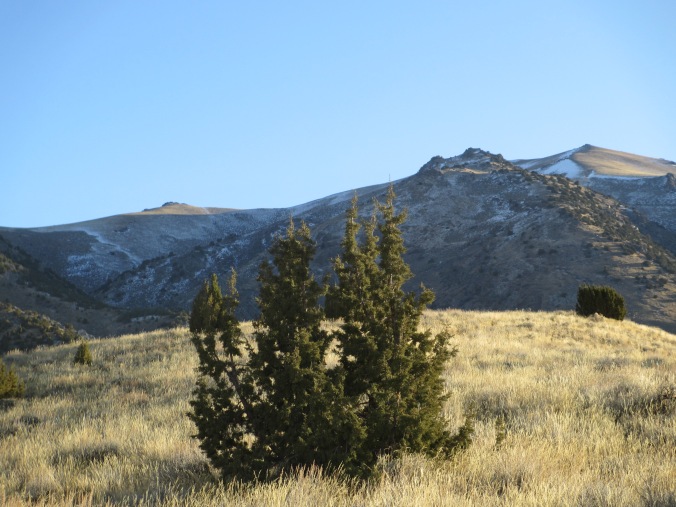 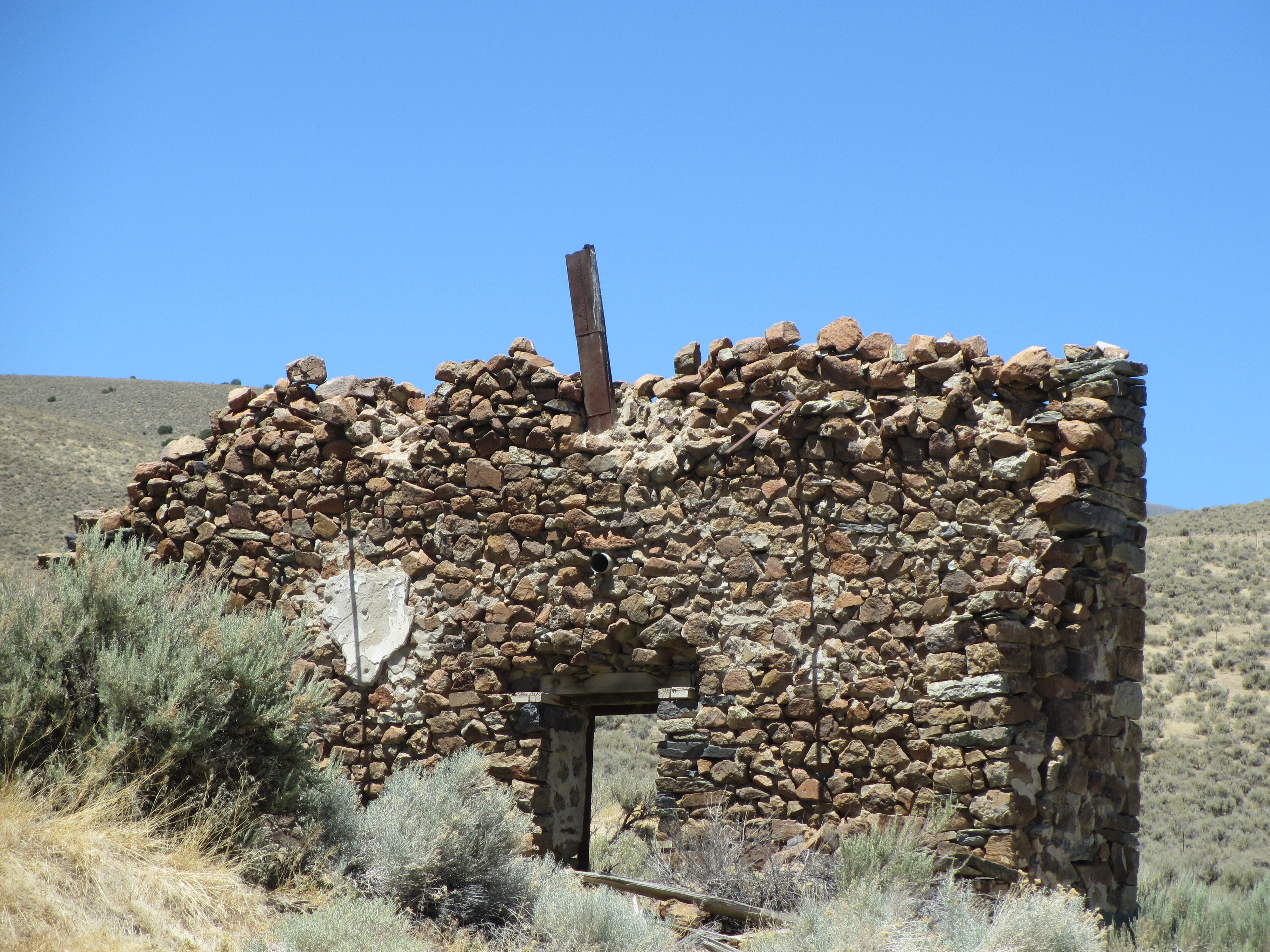 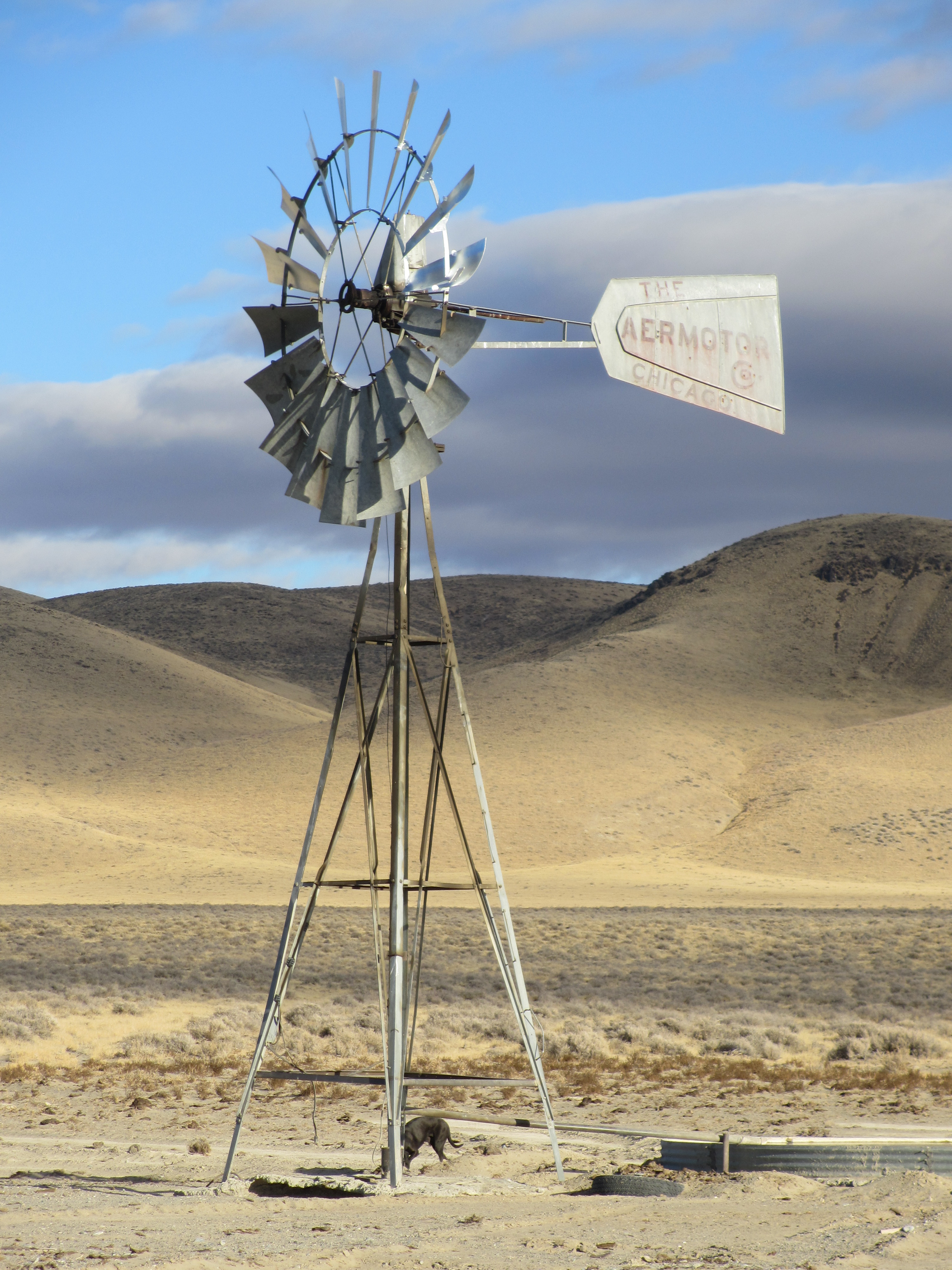 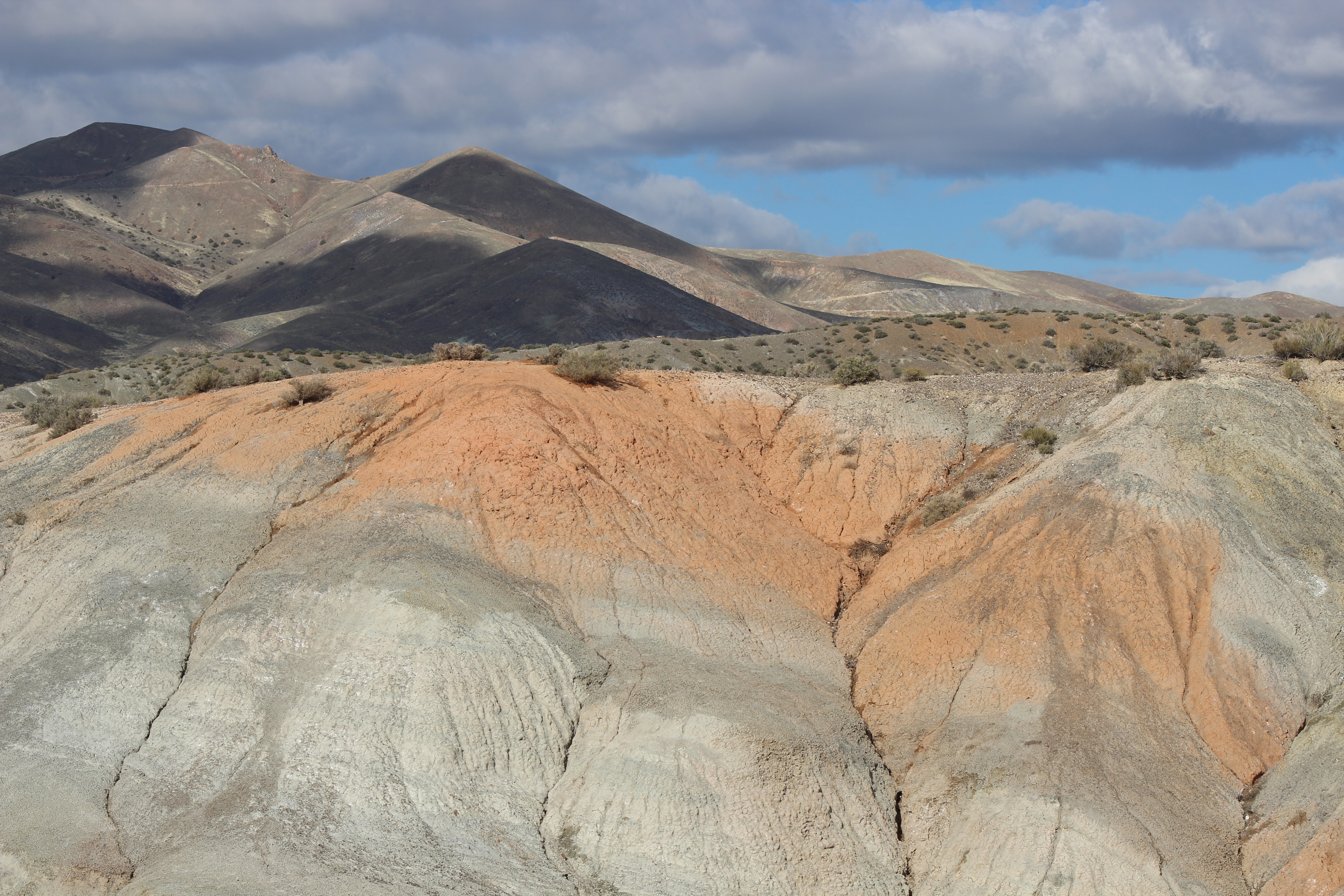 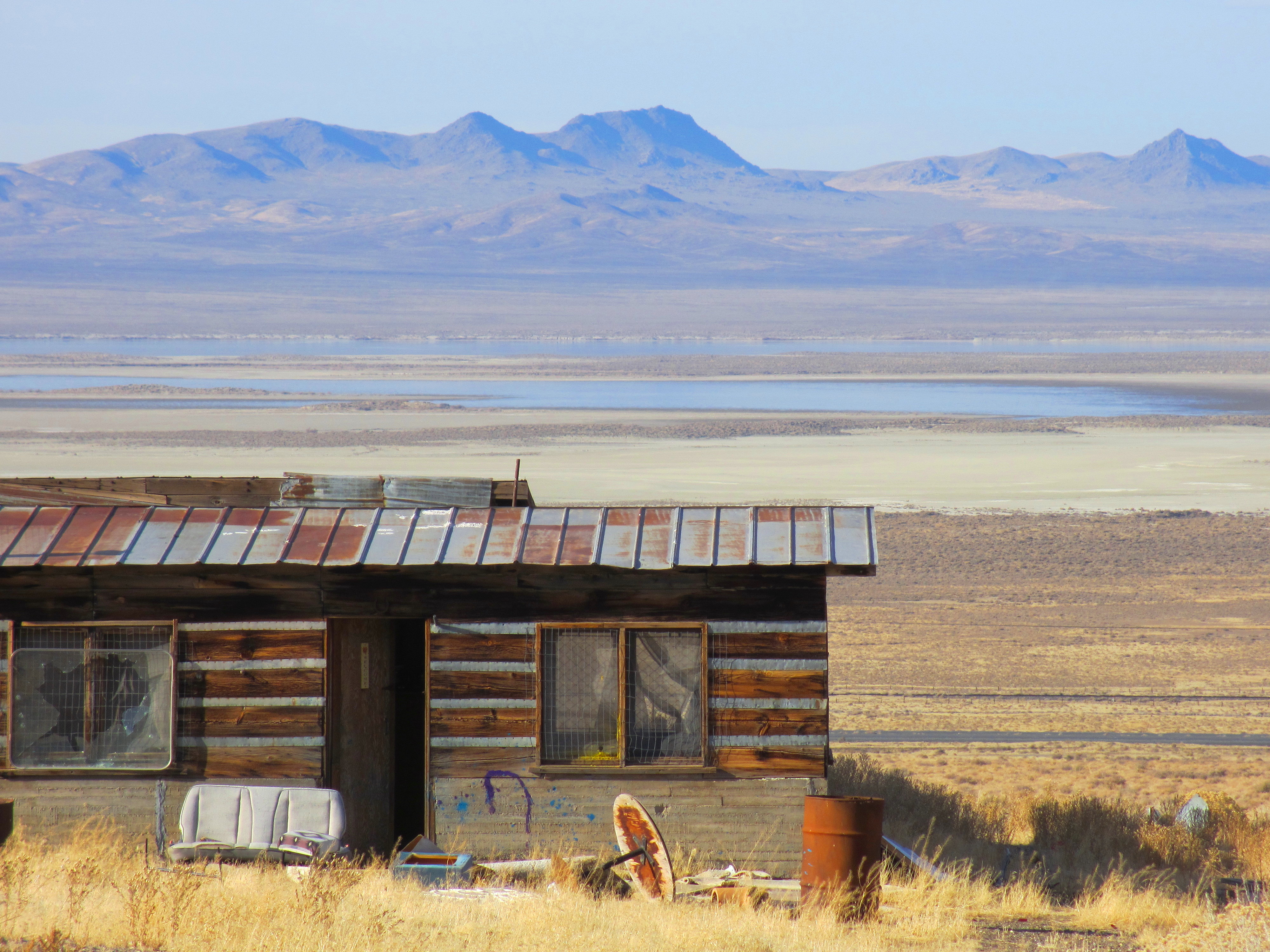