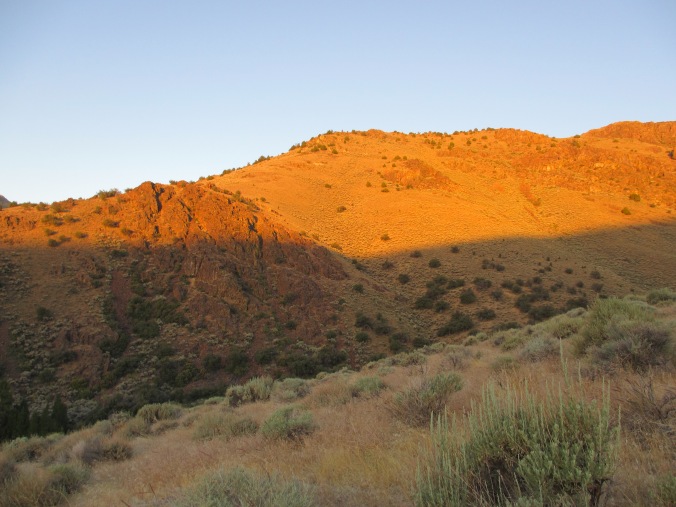 It was my grandfather who, before he took his life, instilled in me a love of adventure and an appreciation for wilderness survival skills.  I reflected on those gifts one morning as I climbed the canyon above Unionville while my husband garnered some needed sleep.  I had never ascended the canyon before and did not know the area much above the hamlet clumped on the otherwise isolated east end of the West Humboldt Range.  My husband and I were camped behind a ridge above that hamlet.  We would have bedded further up the canyon but a slender bent alder blocked our Land Rover’s passage.

As I prepared to depart camp that morning, my husband admonished me in a groggy voice to take a walkie-talkie, so I grabbed one along with my camera.  I inhaled deeply the air chilled by night.  Dawn’s gold light seeped over the canyon walls.  Ahead of me our two hounds traversed the trail.

When the dogs and I passed a tall juniper with plump ghostly-gray berries, it roused a memory of my grandfather.  Juniper berries, he had taught me, indicating the wizened ones we had in Maine where I grew up, could be boiled into a tea which aids digestion.  But at the age of nine I had a cast iron stomach so I wasn’t motivated to put that knowledge to the test.

A small stream bisected our dusty trail, its moisture supporting a patch of spring green grass and a long leafy arbor.  I regretted that my husband was missing so much beauty but was grateful that I felt comfortable hiking solo. 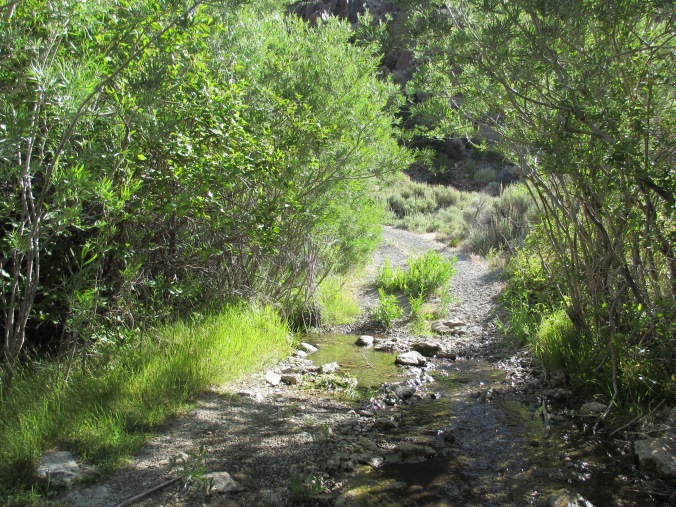 In my youth, my grandfather’s tutelage emboldened me to set out on my own adventures.  Often interspersed with those sojourns were other lessons, sometimes with my younger brother joining in.  Grandfather taught us to distinguish the poisonous red snake berry from the minty red bunch berry.  And to tap maple trees for sap, which we did while imprinting the snowy paths of his land with tracks of the snowshoes he molded for us by hand.

One summer day when we three were together at the Maine shore, grandfather told my brother and me that we could eat the petals of the wild roses mounding over the dunes.  I plucked one of the smooth pink wafers, placed it on my tongue, and discovered within it a delicate sweetness.  And began to feast.

So in the canyon, when I came upon wild roses, the sight delighted me; but when I grew closer, I saw that the petals were waning and could recall that mushy texture tinged with bitterness.

A mile or so up the trail I spotted a red shotgun shell.  I considered picking it up but for a reason I couldn’t identify, walked on.  I could feel it in my pocket though, roll it between my index and middle fingers, remember how I used to wonder how something so itty bitty and weightless could tear such a very sure hole.

My grandfather used to lay his shotgun across the wide arms of his oak rocker to clean it, a box of red shells in two perfectly ordered rows by his side.  He hunted every deer season and as a result we always had fresh meat.  My brother was 16 when he joined the hunts and took to them.  He and grandfather, in red wool plaid with solidly shouldered guns, would vanish into the cold pre-dawn void of light.

Water is a welcome sight In the desert.  The clear silent stream I had seen at the beginning of my hike wound back over our trail again and again.  I paused in the shade of some foliage it supported while the dogs lapped long and slurpily.  The sun filtered over the canyon walls and warmed the air.  Heightened light inspired me so I took out my camera and wandered a bit, pulled by what I saw through my lens.

Continuing up, the incline steepened, forcing me to push from deeper inside. 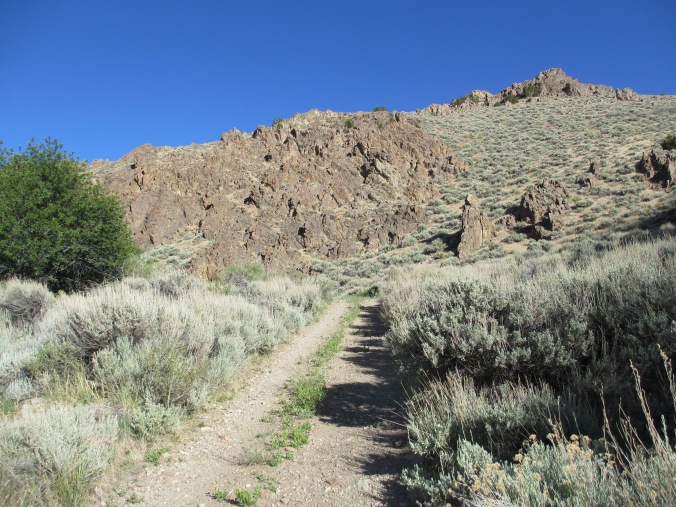 A hairpin turn changed our direction.  Then another and another.  The pattern persisted for forty-five minutes.  Scrub vanished and with it the scent of sage.  Jagged rocks protruded from long flat ledges like teeth in an otherwise hollow smile.

Then abruptly the trail ended with a sheer 2000-foot drop.  I recoiled and grabbed for the dogs.  I planted my feet firmly.  And stared.

There was a time when I would have contemplated jumping.  Most memorably, the afternoon of my brother’s suicide, when I stood on an overpass during rush hour, watching the traffic below, imagining the trajectory of my body, removing my pink mohair sweater and feeding it into an opening in the pipe railing.  My younger brother.  My only brother followed in our grandfather’s footprints, as he had been groomed to do: the berries, the roses, the maples.

It wasn’t until I grew weary of the pain and turned to faith, that I stopped weeping.

“And the peace of God, which passeth all understanding, shall keep your hearts and minds through Christ” –Phillipians 4:7

Suicide, I finally understood, is and always will be incomprehensible.  My brother and I were in our early twenties when my grandfather took his own life rather than seek treatment for prostate cancer.  I tried to understand but from the moment I heard the explosion, I was falling, falling, falling.  I lost sight of my brother through the hurtling debris that distorted my mind.  It was impossible to focus on the petal of a single pink rose.

In Unionville Canyon, with the sun risen just above the peaks, I basked in the ambient brightness.  And turned with the dogs to begin my descent.

Coming down the steepest part, I recognized the spot where I had started taking pictures and realized that there was a fork in the trail that I hadn’t previously seen.  Uncertain which way to go, I chose a direction, traveled it for a few hundred yards, turned around, and walked the other way.  For a moment fear clouded my mind.  I fingered the walkie-talkie in my pocket, knowing I could call my husband–but he could hardly advise me on a route from his position at camp and summoning him would earn me a scolding for having become distracted by my camera.

I said a little prayer and proceeded down the second trail, vigilant.  With each step, I expected to see something I would recognize, even knowing how improbable that was given the relentless sameness of the trail, the flora, the canyon walls.  A few more steps:

Then I saw the red shotgun shell. 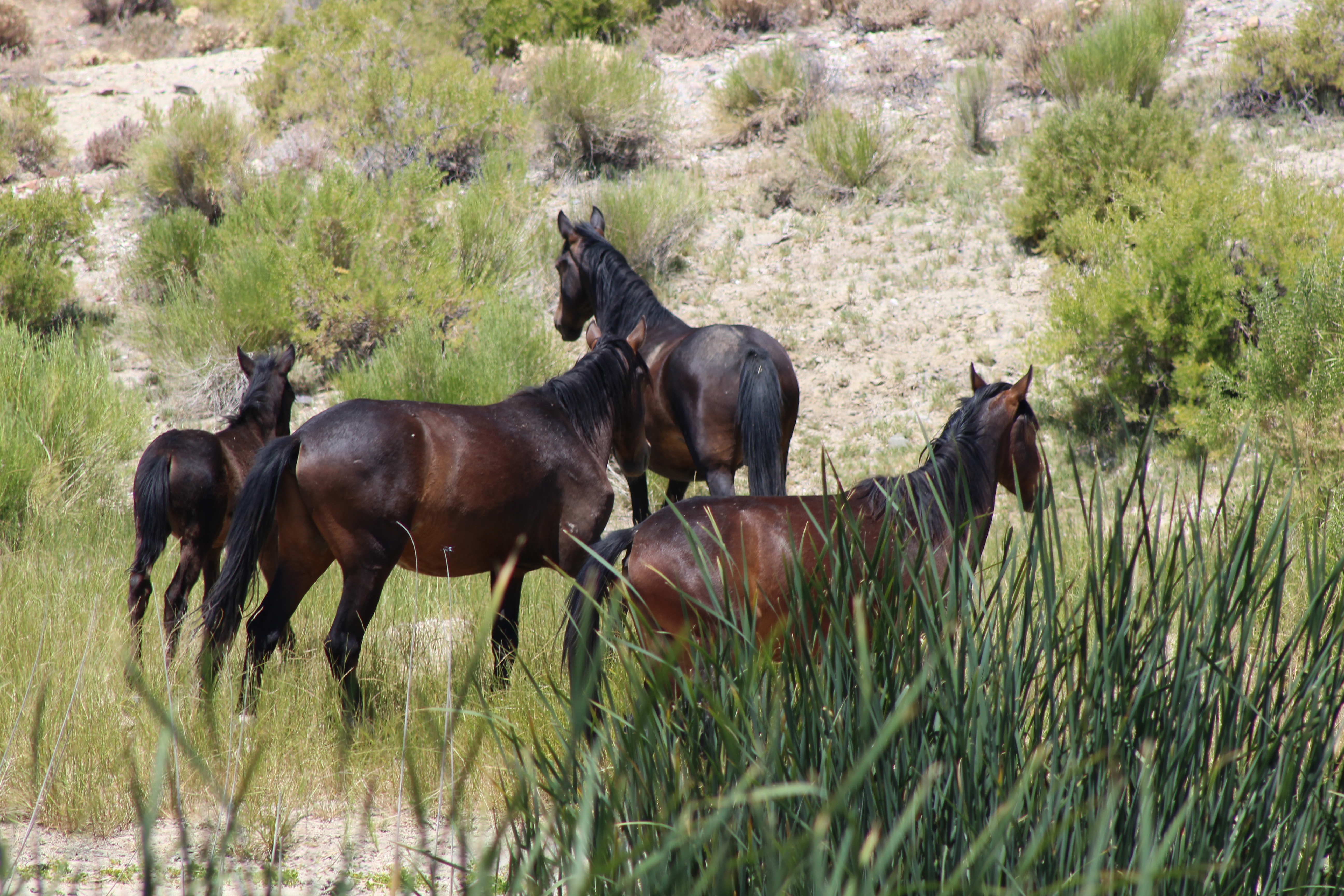 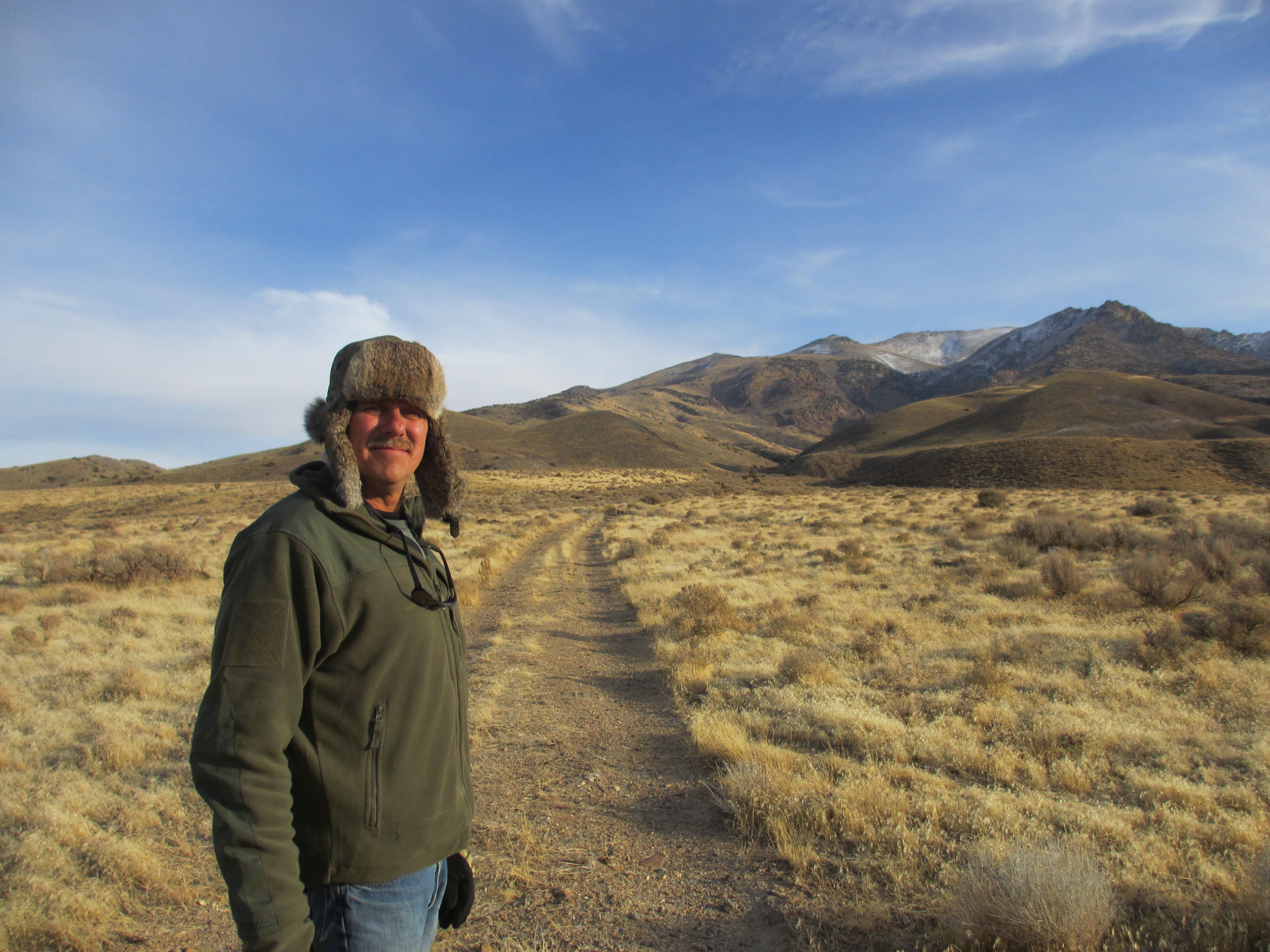 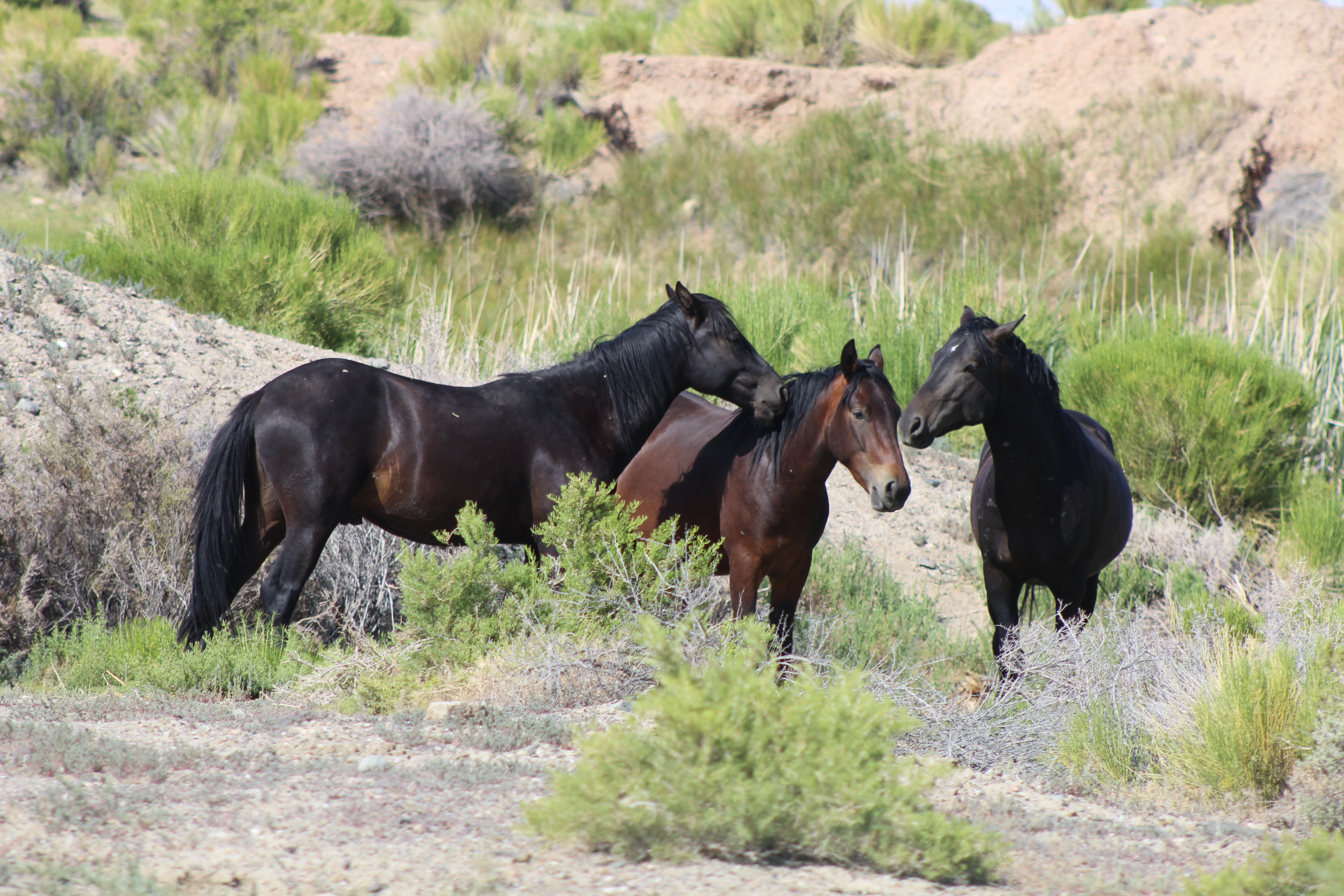 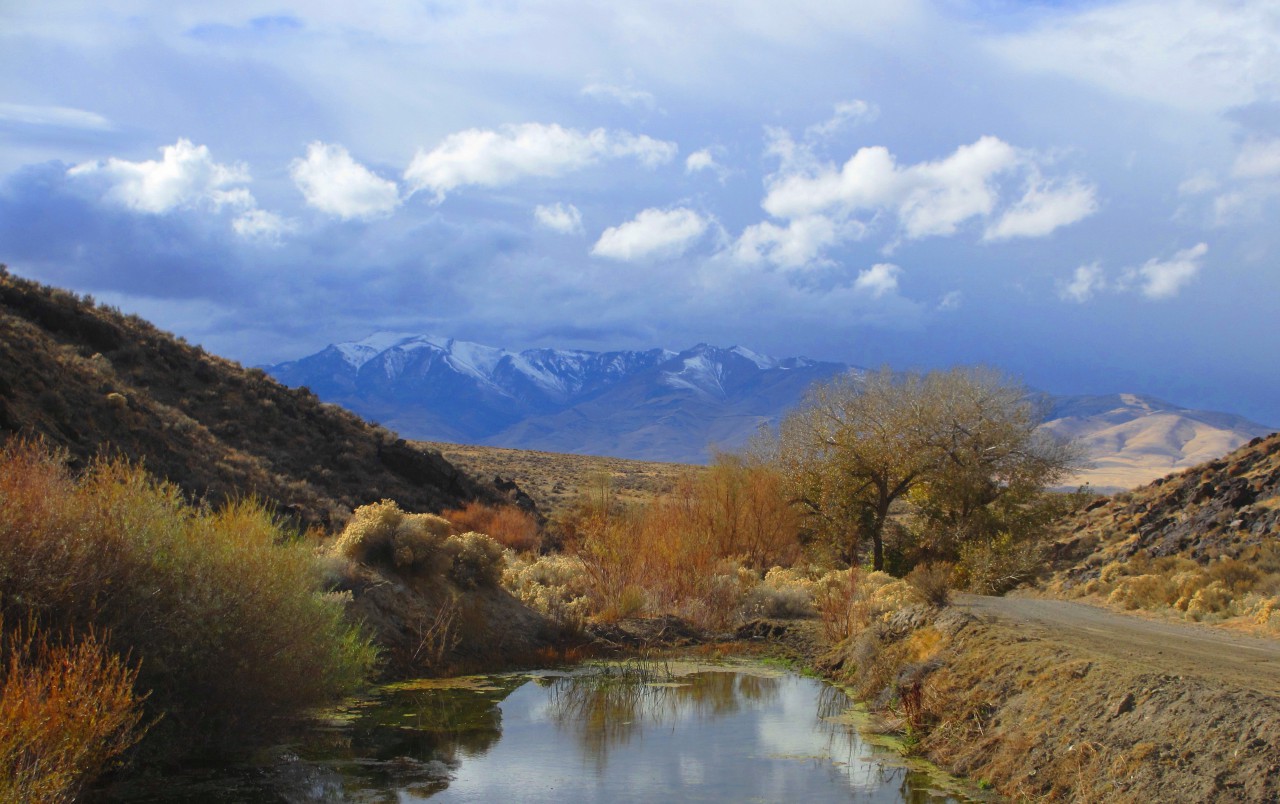 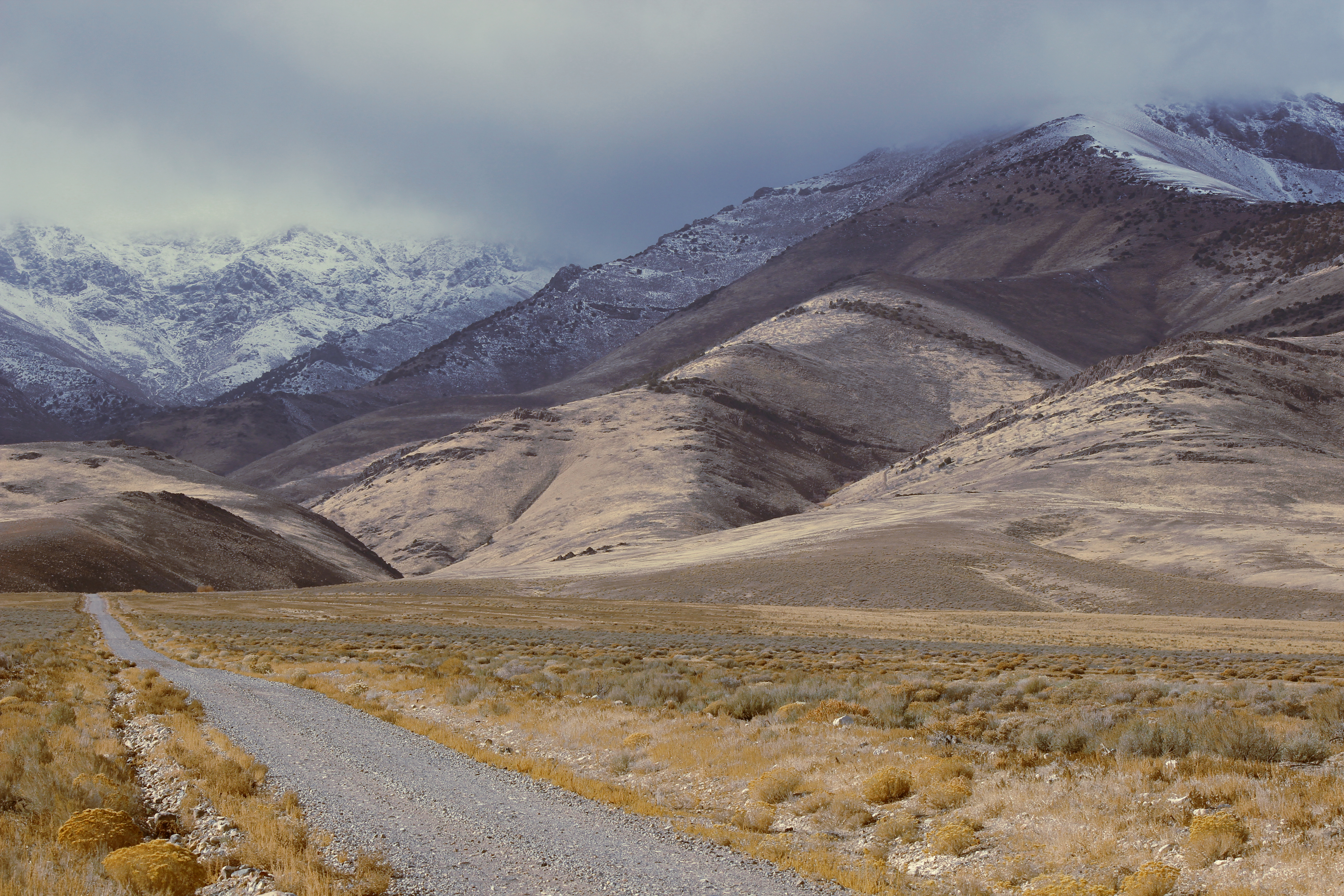